As the HS/MS eCoach, a big part of Matt’s job is to show teachers how to use technology in their curriculum and is their classroom. Switzerland County is a Google school district and teachers and students use Google on a daily basis. Google Trainers help educators better integrate Google Tools by direct training and other services. 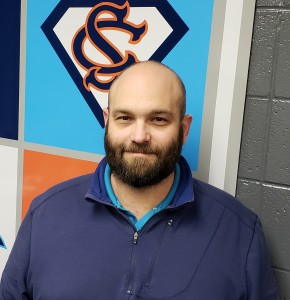 SCMS 7th grade science teacher uses Google’s Applied Digital Skills curriculum to build students’ digital literacy skills. This is the first year for offering this course as a rotation class. She also wrote a guest blog post for EdTechTeam about how she is utilizing this curriculum – check it out here!

ool is honored that our coach received this award.  It is awarded to a coach who has had a transformational effect on the lives of their players and coaches, and has had a significant positive impact at their school and within their community.  The recipient is respected by their players and fellow coaches for their dedication, their positive approach, and their integrity on and off the court.  Coach Dennis will officially receive this award at the IBCA coaches clinic on April 20th.  Along with this award he is given a free spot at the Point Guard College Basketball Camp to allow him further opportunities to bring basketball and life lessons to our student/athletes.

Since becoming a Google school district in 2013, all staff and students have worked to learn and integrate Google Apps in the classroom. Teachers can earn certifications demonstrating their skills at various levels by passing exams: Level 1, Level 2, Trainer, and Innovator. Congratulations to these educators for their achievement!

Elementary teachers, Breanna Pietrykowski and Molly Toomey, were featured on IXL’s Elite 100 of 2017 for their students’ time working 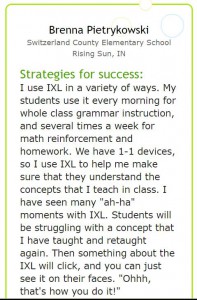 A team of 4 made the trip to Indianapolis March 2017 to deliver a presentation to the Indiana Department of Education (INDOE) the corporation’s plan on how grant monies would be spent to support professional development for teachers and enhance student learning. The team of Cory Bougher, Gregg Goewert, Amanda Alford and Melissa Mullen, had a successful presentation and were announced among the winners on March 7th (see Madison Courier’s article). SCSC is one of 32 districts to receive a grant this round in which 64 districts applied.

The Erwin C. Danner American Legion’s Children and Youth Committee recognizes local educators who have had a significant impact on our community. Travis Griffin was chosen, with the endorsement of his school, to receive this recognition.  The American Legion is proud to identify Travis as one of Switzerland County’s traditional examples of excellence in teaching. During this trying time, he remains in our thoughts and prayers. Congratulations to Travis on his selection as Educator of the Year. 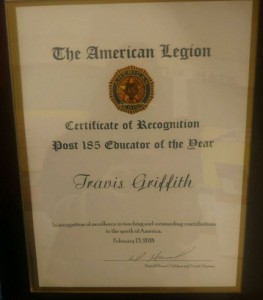 American Legion 2017 Educators of the Year

The American Legion 9th District recognizes an outstanding educator at the elementary, middle, and high school levels each year. Awards are based on career, community service, family involvement and letters of recognition. Each winner receives an $500 award.

with the inborn love for agriculture. For the past fourteen years, Curlin has taken the Switzerland County agricultural education program from a 40-student program struggling to stay a loft to an amazing 176 students enrolled. When Curlin began teaching he knew that he had to develop a curriculum that would be of interest to a larger more diverse audience. Today, Curlin teaches courses in animal science, horticulture, landscape, food science, agribusiness and agricultural mechanics. Curlin has been active in the ag teacher’s organization in Indiana, and served as NAAE president in 2011. 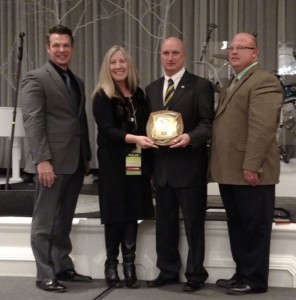