As many of you know, the Jefferson Craig’s Robotics team went to the Vex IQ Worlds Competition that was being held in Louisville, Ky this week.  The team did a wonderful job while they were there. There were 400 teams in the Elementary competition. Those teams were broken up into 5 different divisions.  We competed in the Hubble division. Our Jefferson Craig’s robotics team finished 7th overall in our division! Meeting and exceeding almost every one of the goals they had set for the Worlds Competition.

Our experience started on Sunday as we went to the Exposition Center.  We registered the team and had our robot inspected. After that, the kids spent the rest of the day meeting people from around the country and the world.  The students really enjoyed going around to all the “pits” and talking to the people that were from other states and countries. The pit directly across from us was from New Zealand where they filmed “Lord of the Rings.”  Ironically, the competition was called “Ring Master” so it was very fitting. There was a lot of trading memorabilia with the other teams. Who would have thought that wrist bands, pins, buttons, stickers, flags, and candy from their countries… could be so exciting.   We ended our first day with a practice match, which helped get some of the nerves out.

Monday was the official kick off of the Worlds Competition with an energetic opening ceremony that got the kids pumped up!  Our first few alliance runs were a little rough, but we started to find our groove as the day went on. We also did our skills drive and autonomous drive the first day.  Skills went fine, meeting our goal of a 125 or better. We ran into an issue with our autonomous drive. The rings on the starting pegs were being pushed forward instead of back (like they were at most of the other competitions).  This two inch difference stopped our autonomous program from working correctly. However, the team didn’t let that dampen their spirits.

Tuesday started much better for the team.  Our first alliance match started us off with a good score, setting the tone for the day.  Our second alliance was from Hawaii who had a simple designed robot like ours. Together, we put up our highest score at the competition of 211 points.  This helped our rankings tremendously. The rest of the day continued to help us improve our standings. We finished 15th in the Hubble division, qualifying us for the finals in the division.  We finished 7th in our division with a score of 181 for our final run.

I would like to thank all of our sponsors.  Without their help, we would not have been able to accomplish all the things we did this year.  The Switzerland County Community was very supportive and generous. Our chaperones were a tremendous help as well, setting up our pits and keeping an eye on all our students in a crowd of thousands!  Finally, I would like to thank all my fellow teachers and staff who supported us by letting their students watch the event live! We are building great futures for our students in Switzerland County.

Thanks to all of you for your support! 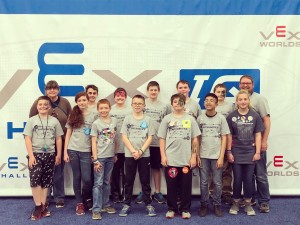